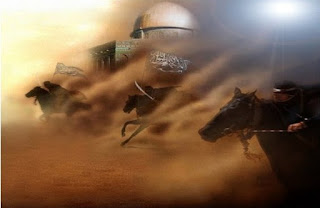 An Obligation and Two Honest People

Abu Hurayrah radhiallahu `anhu has said that the Messenger of Allah sallallahu `alayhi wa salam mentioned a man of the Bani Israel saying:

The debtor went across the sea. When he had finished his work, he looked for a conveyance to take him back for the punctual repayment of his debt, but he did not find any conveyance. So he took a piece of wood and made a hole in it. He inserted in it the one thousand dinars and a letter to the lender and closed the hole tightly.

He took the piece of wood to the sea and said, "O Allah! You know well that I took a loan of one thousand dinars from so-and-so. He demanded a surety from me but I told him that Allah's surety was enough and he accepted Your Guarantee. He then demanded a witness and I told him that Allah was sufficient as a witness. No doubt I have tried much to find a conveyance so that I might pay back his money but could not find one, so I hand this money over to you."

Saying that, he threw the piece of wood into the sea till it went far out into it, and then he went away. Meanwhile he kept looking for a conveyance to take him to the lender's place.

One day, the lender came out of his house to see whether a ship had arrived bringing his money, and all of a sudden, he saw a piece of wood in which was the money. He took it home to use as firewood. When he sawed it, he found his money and the letter inside it.

Shortly after that, the debtor came with a thousand dinars and said, "By Allah! I had been trying to get a boat so I could bring you your money but failed to get one before the one I have come by."
The lender said, "Allah has delivered on your behalf the money you sent in the piece of wood. So you may keep your thousand dinars and go, guided on the right path."

It was narrated that in the days that Musa (Alahi salaam) wandered with Bani Israel in the desert an intense drought befell them. Together, they raised their hands towards the heavens praying for the blessed rain to come. Then, to the astonishment of Musa (Alahi salaam) and all those watching, the few scattered clouds that were in the sky vanished, the heat poured down, and the drought intensified.

Musa (Alahi salaam) then called out to the throngs of humanity, "There is a person amongst us who has disobeyed Allah for forty years. Let him separate himself from the congregation and only then shall we be rescued from the drought." That man, waited, looking left and right, hoping that someone else would step forward, but no one did. Sweat poured forth from his brow and he knew that he was the one.

The man knew that if he stayed amongst the congregation all would die of thirst and that if he stepped forward he would be humiliated for all eternity.

As Musa (Alahi salaam) and the people of Bani Israel awaited for the sinner to step forward, the clouds hugged the sky and the rain poured. Musa (Alahi salaam) asked Allah (Subhanahu wa ta'ala), "O Allah, you blessed us with rain even though the sinner did not come forward." And Allah (Subhanahu wa ta'ala) replied, "O Musa, it is for the repentance of that very person that I blessed all of Bani Israel with water."

Musa (Alahi salaam), wanting to know who this blessed man was, asked, "Show him to me O Allah!" Allah (Subhanahu wa ta'ala) replied, "O Musa, I hid his sins for forty years, do you think that after his repentance I shall expose him?"
Posted by Tayyaba Khalil at 1:11 PM No comments:

Thalaba Ibn AbdulRahman was a young man at the age of 16. He always ran errands for the prophet Muhammad (peace be upon him). One day while walking though the city of Medina, he passed by a house with an open door. Out of curiosity he took a glance inside. In this glance, he saw a light curtain being blown away from a bathroom entrance were a woman was bathing. He lowered his gaze.

With an extreme feeling of guilt and hypocrisy his mind ran. Thinking to himself, ?How could I be of the companions, one that is close to the Prophet Muhammad (peace be upon him), one who runs his errands and be so horrible as to disrespect peoples privacy??..

He feared that Allah would reveal to the Prophet (peace be upon him) evidence of his hypocrisy. His guilt denied him to ever show his face to the Prophet Muhammad (peace be upon him). So he ran away. Days went by and the prophet kept asking the other companions if they had seen Thalaba. No one had seen him. With the Prophet Muhammad's worry about Thalaba he sent a few of the companions to look for him everywhere, among them were Omar Ibn Al Khattab and Salman Al Farisiy.

They looked everywhere in Medina, and on the out skirts of Madina, until they came about a set of mountains between Mecca and Medina where some nomads where herding sheep. The companions asked the nomads if they had seen a young man with Thalaba's characteristics. They told the companions about a weeping boy. He had been here for 40 days. He came down from the mountains once a day weeping and drank the milk they would offer him. Then he went back up the mountains weeping, crying, always asking for Allah for forgiveness, and saying words of repentance.

So the companions waited until he came down and watched him. He had lost weight. His countenance reflected sorrow as he drank the milk that was mixed with his tears.


The companions insisted that they take him back to the prophet (peace be upon him) he refused and asked them if Allah had revealed verses saying he was a hypocrite. They told him that they had no knowledge of any such verses. He was taken back to Medina where the Prophet (peace be upon him) went to see him. He asked again if Allah had put him among the hypocrites or revealed that he was.

The prophet told him it was death and his time had come.

He witnessed while Thalaba's head was on his lap, Thalaba proclaim "There is no god worthy of worship other than Allah, and that Mohamed (peace be upon him) is the messenger of Allah".The prophet (peace be upon him) washed Thalaba and carried him to the grave.

It is narrated that on their way to bury Thalaba, the prophet (peace be upon him) walked on his tippy toes as though he were in a crowd.

When Omar asked about this, the prophet (peace be upon him) explained .....that he was being crowded with the angels.

So many angels had come...
Posted by Tayyaba Khalil at 11:21 AM No comments:

Posted by Tayyaba Khalil at 9:34 AM No comments: